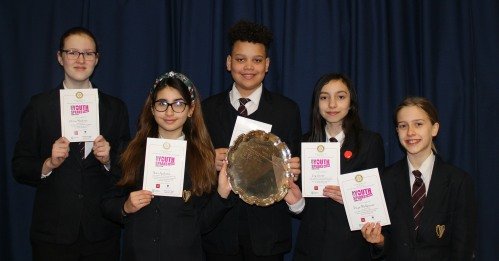 St Dunstan’s Year 8 pupils showed exactly how proficient they are in the art of public speaking last week when they came first and third in Youth Speaks; a prestigious national competition organised by the Rotary Club.
All participants had to abide by the rules of the competition which include memorising speeches, using cue cards and confidently speaking to a large audience.  In addition, teams had to present their debates within a strict time restriction of 15 minutes in total as well as responding to a question from the audience.
Pitted against six other teams, Henry, Ivy and Nara took the top spot with their debate on the pros and cons of The Mosquito Alarm; a device which is said to help deter anti social behaviour.  Chairing and controlling the debate was Nara Andrade, with the proposer - Henry Reeve - speaking in favour of the device and the opposer - Ivy Silver - presenting the argument against it.  The team impressed the judges with their well structured, fluent delivery of their arguments.
In addition to the winning team, the school also put forward a team, comprised of Olivia Masters, Russel Turner and Eliza McKeever, who debated which animal - cat or dog - was best to have as a pet. This team came in third place out of the seven teams.
Both teams spoke confidently and presented well structured arguments utilising a range of persuasive techniques which are frequently taught as part of their English lessons and are a good grounding for further study and the world of work.
We would like to thank the Rotary Club, who plan and facilitate this event every year. The winning team will now go forward into the next round where they will compete to go forward into the District Final.  We wish them every success!
<< Back to News List